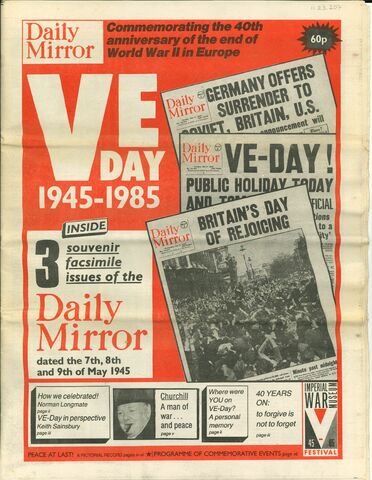 Daily Mirror, 1985 met herdrukken van daily Mirror van 7,8 en 9 mei 1945 'Forty years on: to forgive is not to forget' 'VE-Day in Perspective' 7 mei: 'Germany offers surrender to Soviet, Britain, US.' 'Portugal has broken with the Nazis' 'Prague relieved - 1 am message' 'Germans and US troops fight SS' ' Hess guards have become Press guards' ' Call-up men report even on VE-Day' ' Victors in the Parlour' ' She gave name as 69205..' holocaust. Constantinova kinderkamp ' War in berlin's heart' 'Nazi's had bead on the general' 8 mei: ' VE-Day! Public holiday today and tomorrow - official' ' Celebrations delay due to technicality' 'czechs flown from Britain to save prague' ' Goebbels and his famiyl are found, poisoned' 'Huns are again putting on the old cloak of repentance' 'Defiant SS made me a prisoner in Denmark' 'A dairy of the war' 'war goes on as usual in room 109' ' The danes say thank you' ' This is how Londeners waited for Ve news in Piccadilly' 9 mei: ' Britains day of rejoicing' ' The three forgotten architects of victory.' ' Huns had to sign in Berlin's ruins' ' New surrender move halts Prague terror' ' Tribute to empire' ' The nation celebrates. Your victory - Churchill to the people' ' Celebrations on the beaches' ' Surrender at Rheims'